Posted at 12:20h in Uncategorized by Iris Buunk 0 Comments
0 Likes

On the 16th of March 2021, we held the first of our two-part vision-building workshop series titled ‘Open and Citizen Science in Higher Education: Co-Creating a Shared Vision’. The workshop was designed to inspire participants to think systematically, share their experiences, challenges, and jointly find solutions to the commonly identified obstacles when it comes to implementing Open and Citizen Science. 37 staff/faculty members and students from libraries and universities attended and discussed citizen science practices at their institutions and how these practices could be possibly adopted to serve as models practices for other Higher Education Institutions (HEI).

The goal was to involve all attendees and have active participation and lively discussions. The session began with a short 15-minute lecture by Dirk van Gorp, Open Science Manager at Radboud University, Nijmegen, The Netherlands, and a member of LIBER’s Citizen Science Working Group. Dirk spoke about the relationship between Open and Citizen science as well as the library and university support that is needed and provided in Nijmegen to help staff focus on open science and the BESPOC (Broad Engagement in Science – Point of Contact) model. 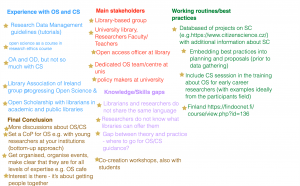 Some of the notes made during this interactive workshop.

The workshop concluded with a wrap-up, during which each group presented the outcomes of their discussions. While the majority of participants generally ranked the quality of group discussion as high, many suggested allowing and encouraging participants to stay in touch after the workshop to continue discussions and cooperation. They also noted that the mixed nature of the groups and levels of expertise reflected the Citizen Science approach and brought an interesting angle to the discussions.

The outcomes of the discussions will serve as the basis for a document on the recommendations on Open and Citizen Science implementation at HEI. The results will also serve as a starting point for discussion during our second workshop of the 2-part series – Shakers & Makers: key stakeholders in Open Science & Citizen Science (registration for which is currently open and does not require participation in the first workshop). This second workshop will bring together an audience comprising stakeholders to further highlight how to best advance on the topic of Open and Citizen Science at HEI.